Great experiences on a small budget – as a full-time backpacker

The Peace Bridge and Rainbow Bridge in Calgary

The Peace Bridge in Calgary is actually quite new. With its shiny red colour and unique shape, it definitely stands out architecturally in Calgary. It opened in 2012 but has become something of a landmark already. I’m sure you’ve seen it on pictures – Fredrik and I have, many times. Since we’re leaving town soon, we realized we can’t leave without having visited the Peace Bridge in Calgary!

Despite being here for pretty long, about 4-5 months, I’ve actually only seen the bridge once. It was from one of my favourite places – Crescent Heights. Although, that was from a pretty far distance and from above, so it didn’t really do this beautiful bridge justice. 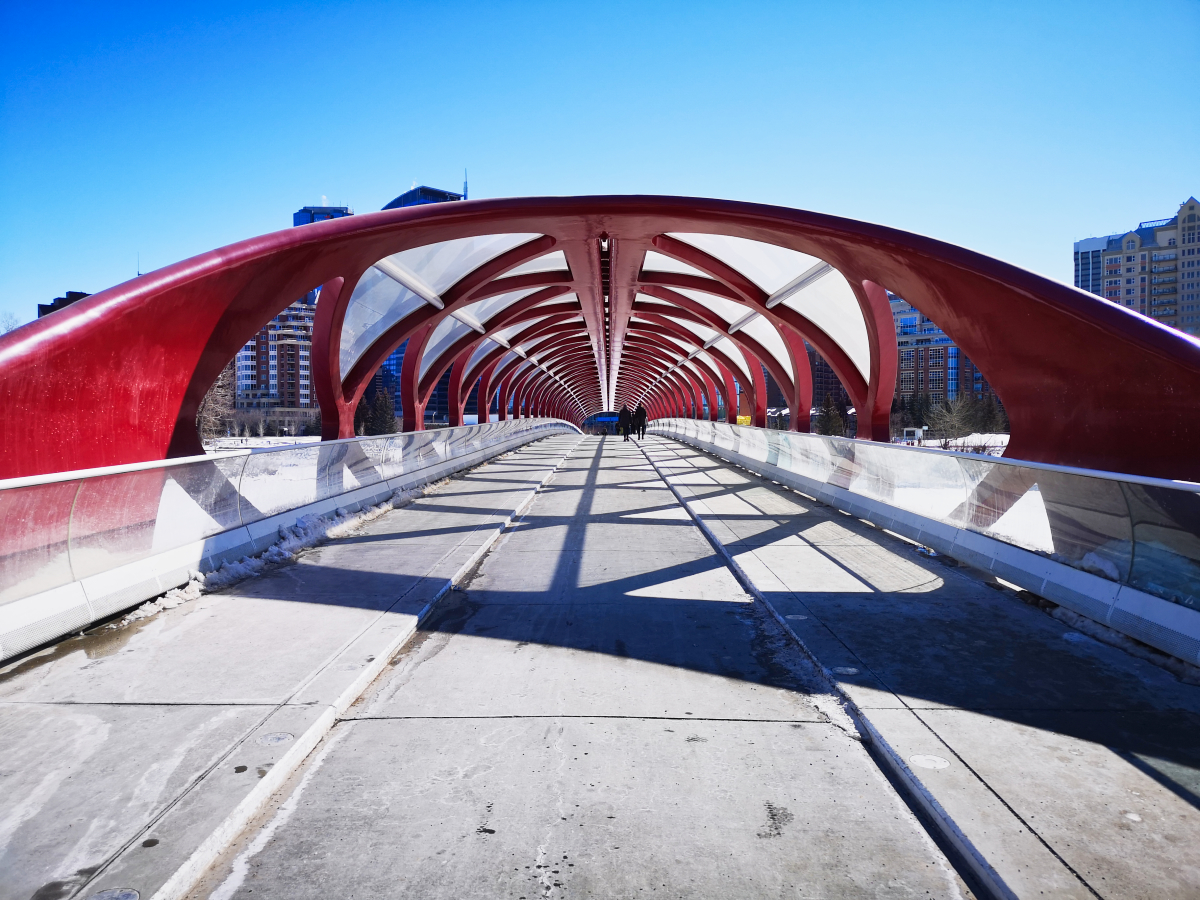 The Peace Bridge in Calgary – on the other side, you’ll find the skyscrapers and the city centre!

This time, we went on a walk all the way to the bridge (a good hour from where we live, but the weather is finally better so it was OK!) The Peace Bridge isn’t for vehicles, if you don’t count the bike lane in the middle.

The bridge is situated rather close to downtown, but still not in the heart of the city, so it’s not something you’ll see if you’re not exploring the northern parts of downtown. Although, I think you should – they are pretty nice! If you do, remember to take a walk up on Crescent Heights!

Quick facts about the Peace Bridge in Calgary

The bridge was built due to the high number of commuters using the pathways to get to work in Calgary.

How to get here

If you’re in Downtown Calgary, walk up 7 St SW and you’ll get directly to the bridge. From other locations, go to Sunnyside and follow Memorial Drive, and you’ll soon see the bridge – it really stands out!

If you like bridges, architecture or anything colourful – yes! 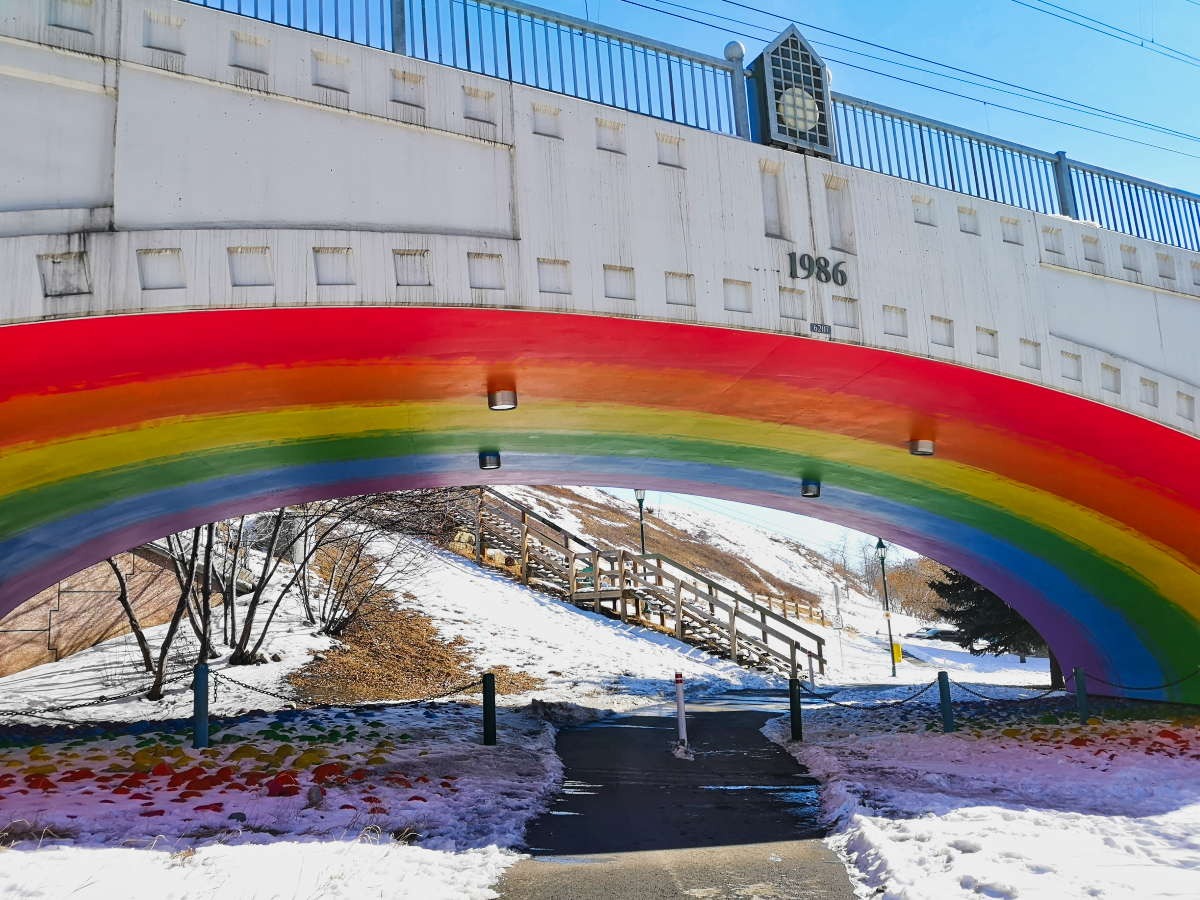 This colourful Rainbow Bridge in Calgary is situated rather close to the Peace Bridge – but this one is much more hidden!

The Rainbow Bridge in Calgary

The Peace Bridge is definitely my favourite bridge in town, but it’s not the only one worth to visit! On my way to the Peace Bridge, I found this beautiful Rainbow Bridge in Calgary!. It’s really a hidden gem in Calgary – I’ve never heard of it before and it’s not listed as a landmark on Google. If you didn’t know about it, you probably wouldn’t find it.

If you check out the location of the bridge, 9a St NW, in street view on Google Maps, you’ll see that the bridge is not even painted when the picture was taken!

This park, which also is an island, is located right next to the Peace Bridge – but to reach it, you have to use another bridge. Here, you can stroll around, have a coffee, admire the contrast of skyscrapers behind the trees and just take in the view of the city – and the Peace Bridge!

There are quite many bridges to explore in Calgary!

Not had enough of bridges yet? Continue on Memorial Drive, and you’ll soon get to George C. King Bridge that will you to the beautiful St. Patrick’s Island Park!

Don’t forget to get a free copy of my e-book!

OK, I'll tell you a secret, but don't let anyone e

Have you ever seen a fur seal pup before!? 😱 I

Travelling makes me sad. You know, in one way. Bu

I got some news! We're LEAVING Australia this week

A photo from last week - this hidden gem, that so

Do you know where this photo is taken? No, it's no

Get my new E-book

In 2018 I quit my full time job to instead be a full time backpacker with my boyfriend. Our adventure starts with one year in Canada on working holiday visas – who knows what happens next? That’s part of the adventure! 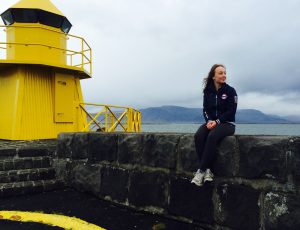